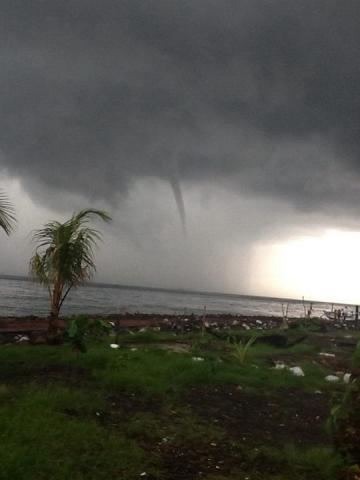 I'm posting two pictures -- pictures 2 & 4 -- of the blembung that occurred two days ago, around 8am, 4km (est.) from the coast of Les Village, Bali. Blembung is a sea-occuring whirlwind or waterspout/tornado. That which occurs on land is called puting beliung by the Balinise. Picture 2 has both darkness and light mixing chaotically. Here, according to the fisherfolks around me, the sea has reacted by spraying a cloud of white mists upward towards the gray-dark heavy mass of air that punctured it with a whirling funnel of black wind spiraling downward. Picture 4 is mid-way into dissipation and separation, when the mass of air has moved farther south (landward) west (towards us) and could no longer sustain the enormous energy needed by the air funnel to continue its intercourse with the sea. Pictures 1, 3, 5, 6, and 7 are pictures not taken. Picture 1 would have shown Blembung at its darkest and meanest just before the wind funnel punctured the sea. Its around this time I noticed the dark mass of air pointed to me by the fisherfolks who were rushing to the shore to pull their boats away from the beach and up into the newly built coastal seawall. I initially thought a plane has crashed and what I'm seeing is the smoke from the wreckage. Between the time I've negotiated the thicket of Balinese and Bahasa Indonesia words to know where and what to look for and realize I'm looking at a blembung, ascertained we are safe (Kumang assured me they have enough experience with blembung to say it will not hit land), rushed back to the villa to get my ipad, fumbled with its video control, gave up and settled into taking pictures instead, the mean dark mass that would have been picture 1 has morphed into that which was captured in picture 2. Picture 3 would have shown the funnel vortex that's all white in the inside with thick dark bounding lines from its point of contact with the sea all the way up its point of origin in the clouds -- but it occurred at the briefest moment and one I thought I captured with ipad video. When I realized the ipad is not taking any video at all -- its long past the moment of perfect exchange in the funnel and what I captured is the moment of dissipation in picture 4. Picture 5 would have shown the wind arriving where I am shortly after I've taken picture 4, flapping and swishing everything around me, and the rain that followed a few minutes after, drenching everything around me, but then I'm too busy rolling up the mats and pulling down the blinds and saving other valuable things from exposure I have no time to take any picture. Picture 6 would have been taken around 11am, about an hour after the rain has stopped and the wind has died down. The sea that's been swamping the coast with barrel sized waves has calmed down into a lake-like placidity. It would have shown me snorkeling into this calm sea and encountering underneath a swirling mess of dust and sand particles, planktons and stinging jellyfishes and other detritus galore. But then I have no special underwater camera that could capture the calm surface of the sea and the chaos underneath in one click. Picture 7 would have been taken yesterday, when I snorkeled on picture perfect coral reefs with visibility that goes by tens of meters, or today, with conditions as normal as yesterday, or tomorrow when I expect it will be as ordinary as today. But I've taken pictures of this before and like everyone else, I take in strides all that is ordinary until an elemental force like the blembung jolts me back into the chaos of desiring to take pictures again.