LES VILLAGE: Resilient Corals in the Time of Coral Bleaching 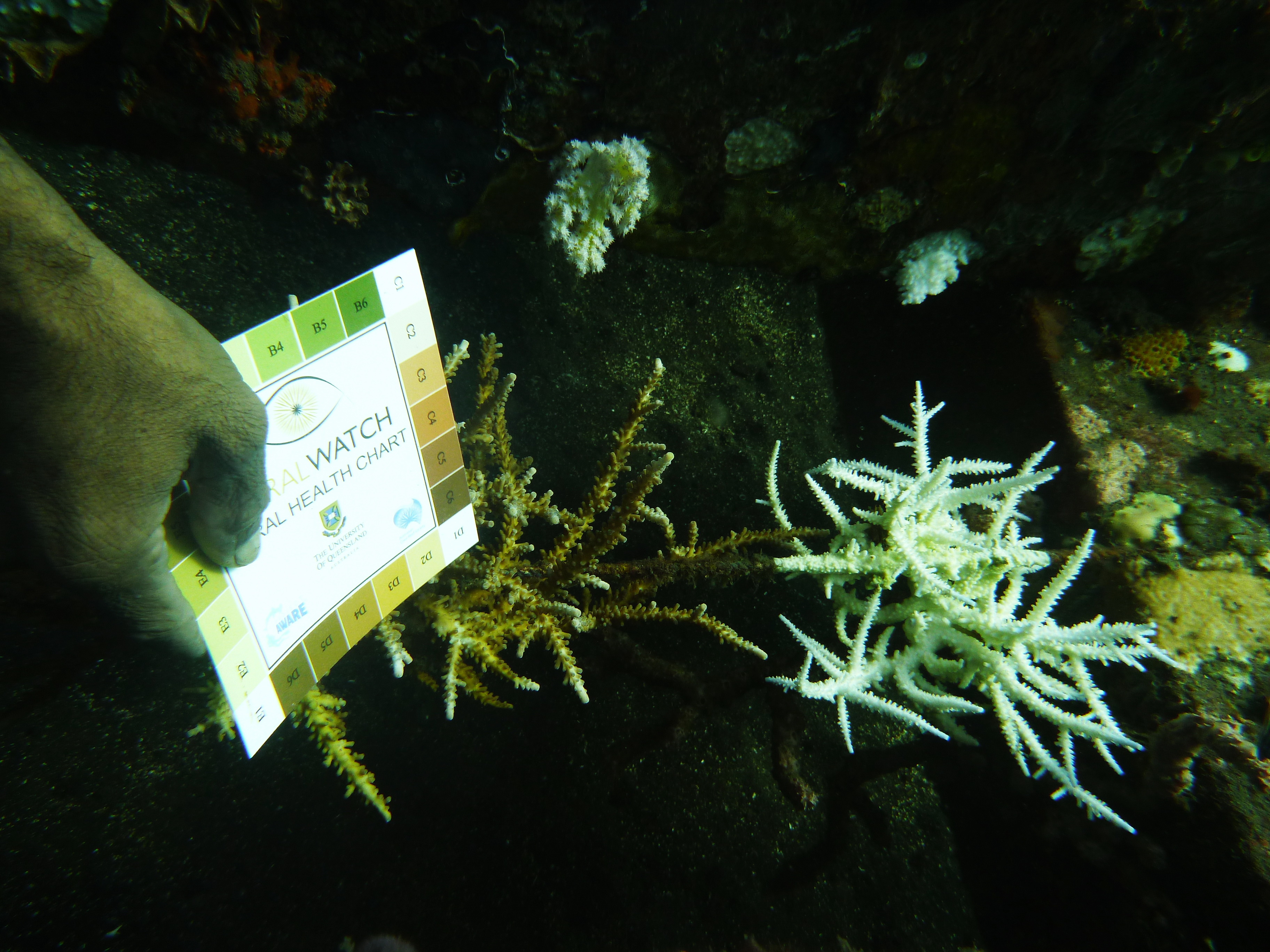 A resilient coral and a bleaching coral at the coral rope nursery.

Sea Communities started today  to focus on the positive side of coral bleaching -- resilient corals.  In Les Village, we zeroed in on the  two lines of the Coral Rope Nursery at the adopt-a-coral structure and made an inventory of  transplanted corals that are bleaching  and those that are thriving. We also selected several  natural corals sites that were once source of transplanted corals and, like in the coral rope nursery, made an inventory of those are are bleaching and those that are thriving. The  monitoring will be done periodically to determine which are the more  resilient coral species in this part of Bali. This will guide the selection of coral stocks in future coral plantings.

Sea Communities is doing the monitoring upon recommendation by and under the auspices of Lutfi Afiq Bin Rosli and Daisuke Taira of the Tropical Marine Science Institute of the National University of Singapore and Pahlano Daud of the Manado State Polytechnic.

The dive done  last May 18 showed that coral bleaching continues to spread among the corals of Les Village.The biggest table coral in the METRO coral garden is among those that have bleached. 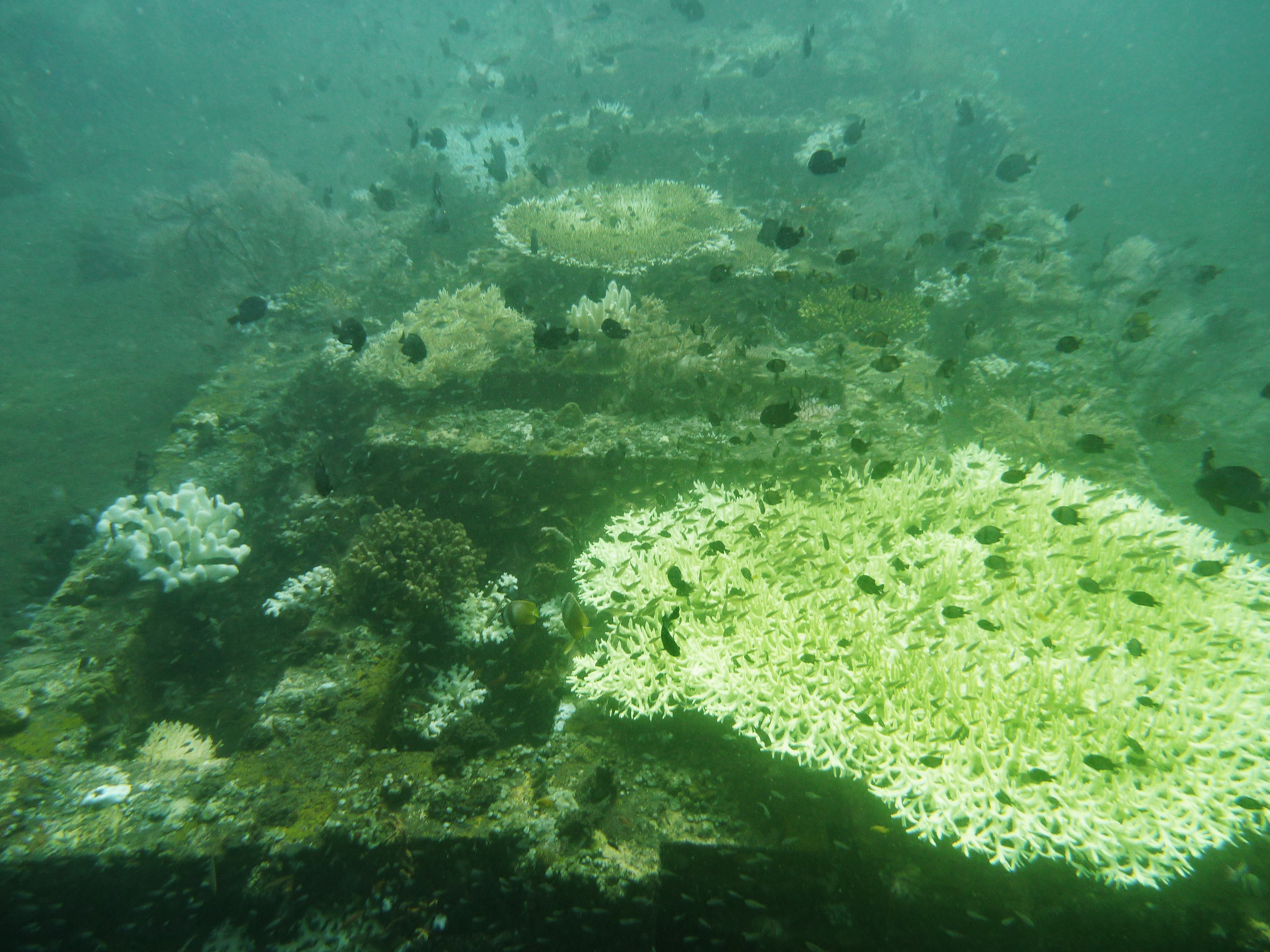 In the coral rope nursery, some corals died, other continue to survive.  Those with  extended finger-like  branches suffered most. 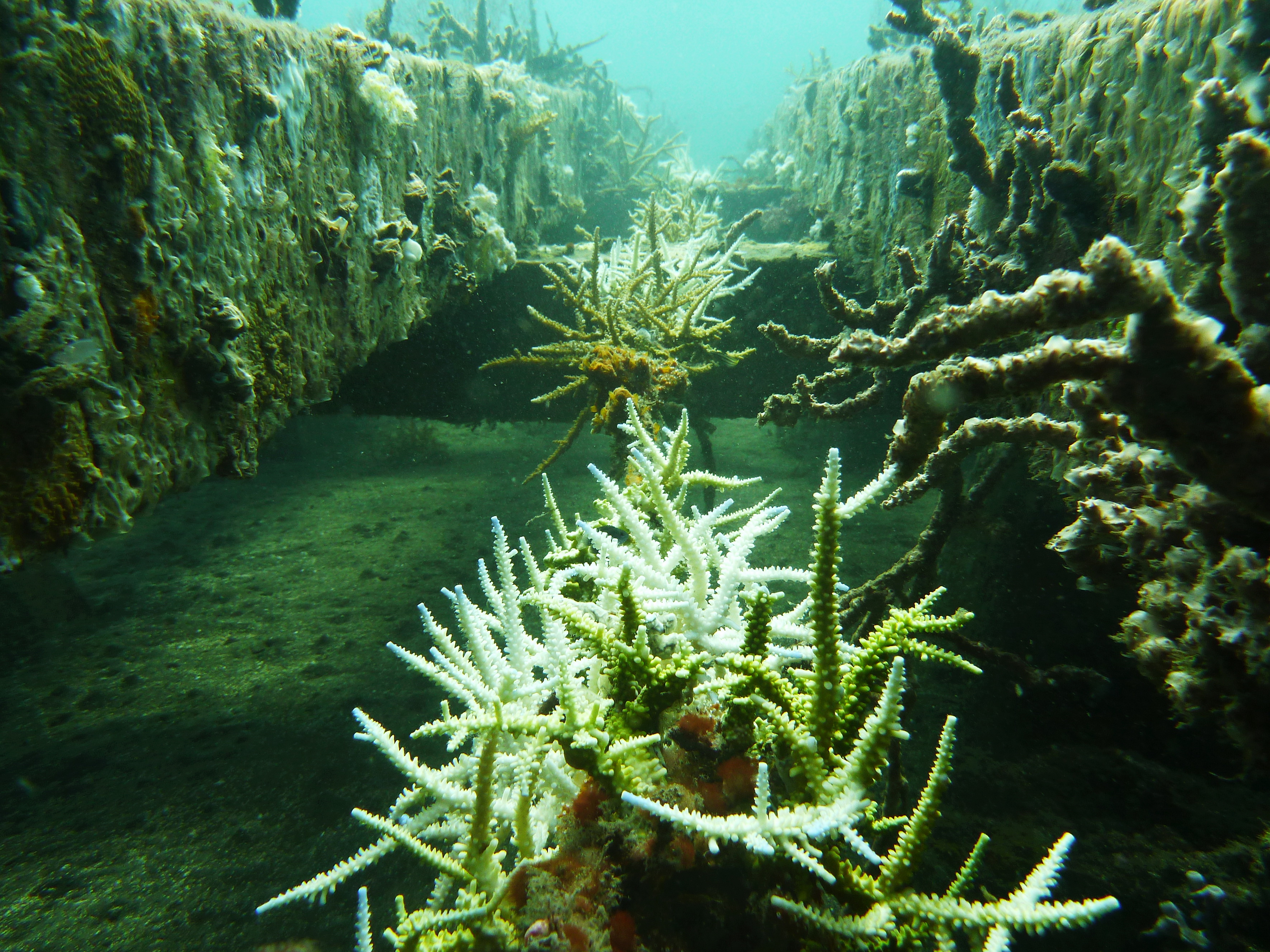 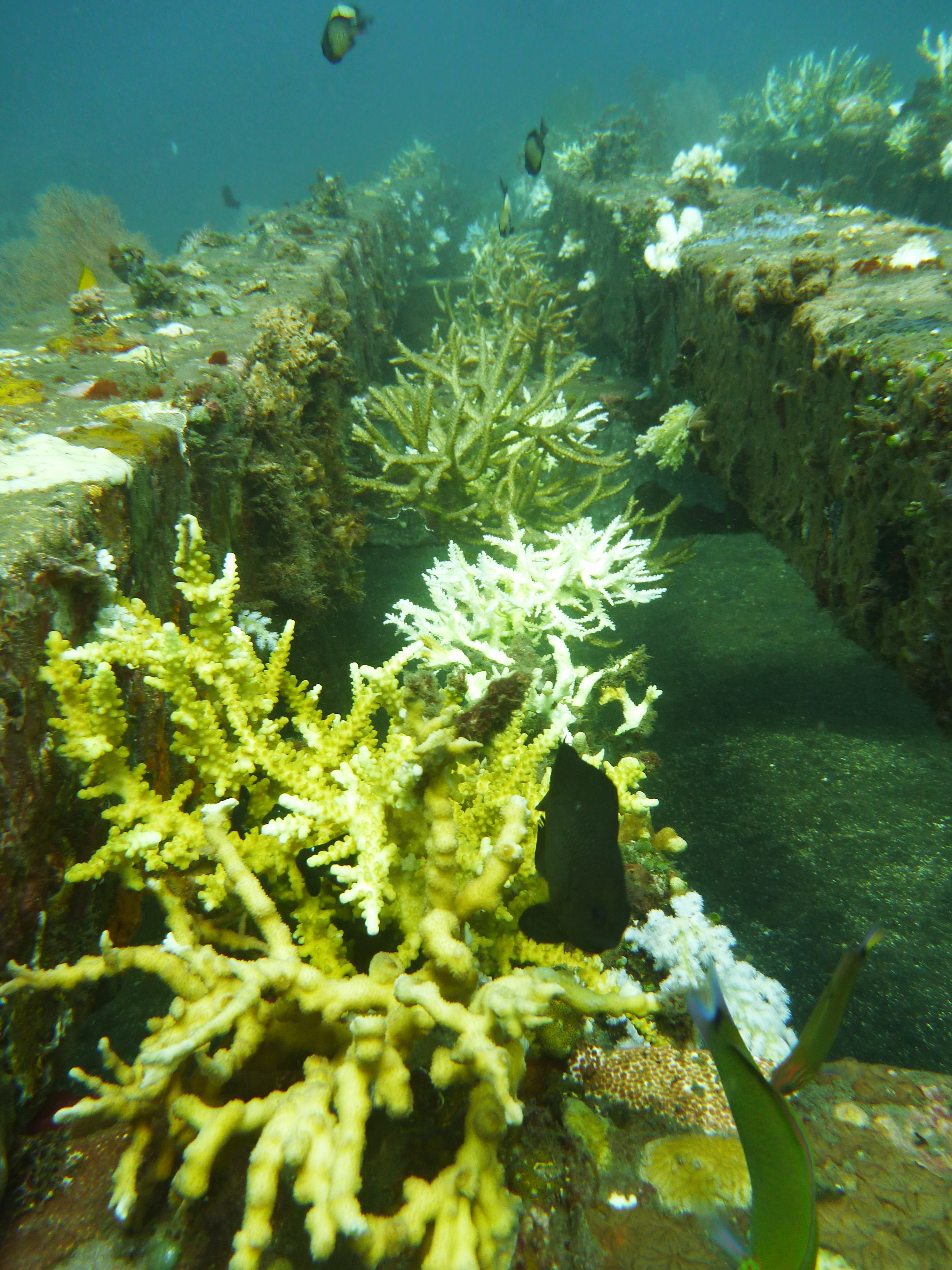 Among corals in natural substrate, some of the worst bleached corals have turned from white to brownish as algae started to turn them into their villas and homestays. Others are still fighting and are 50-50; 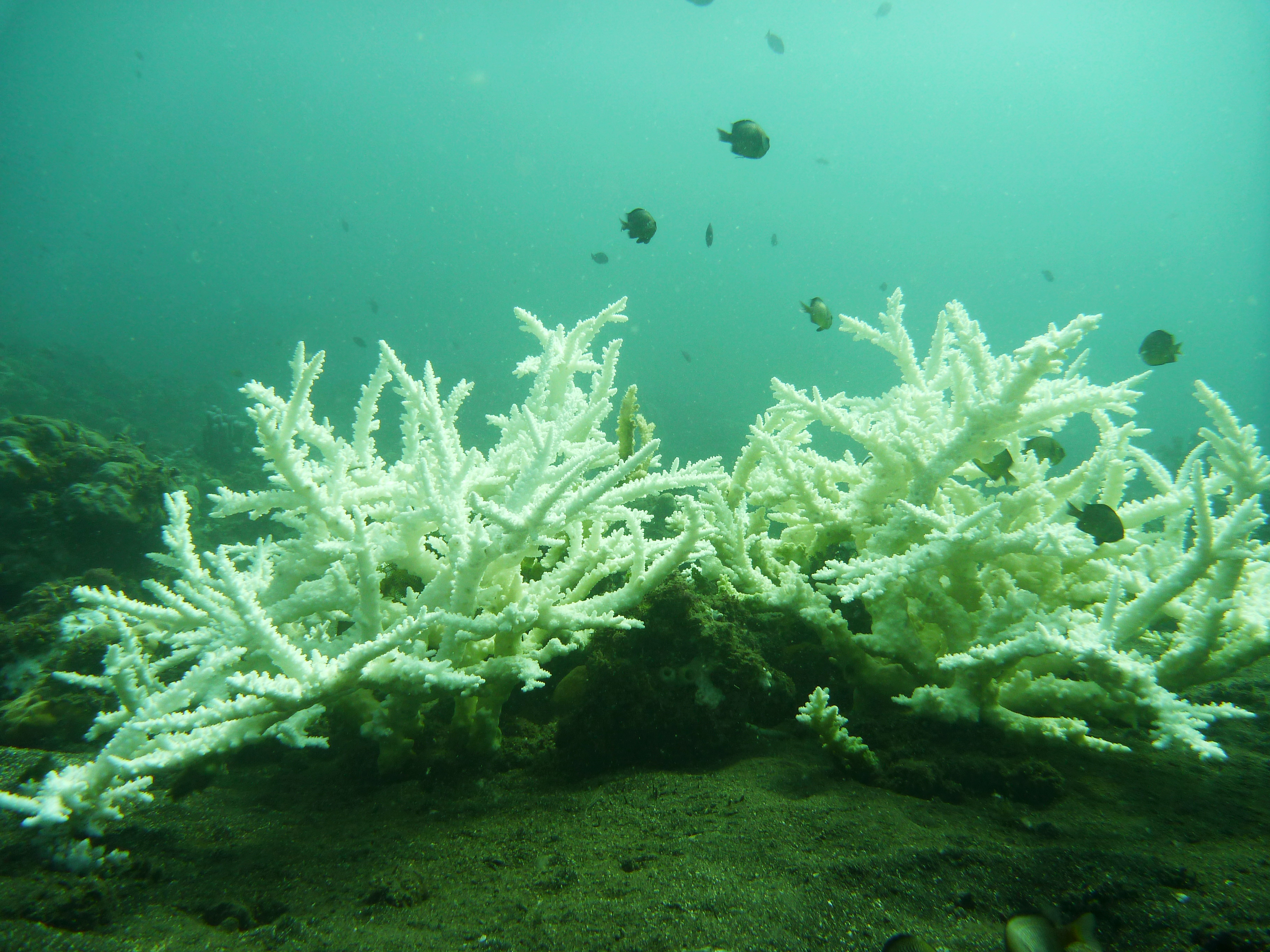 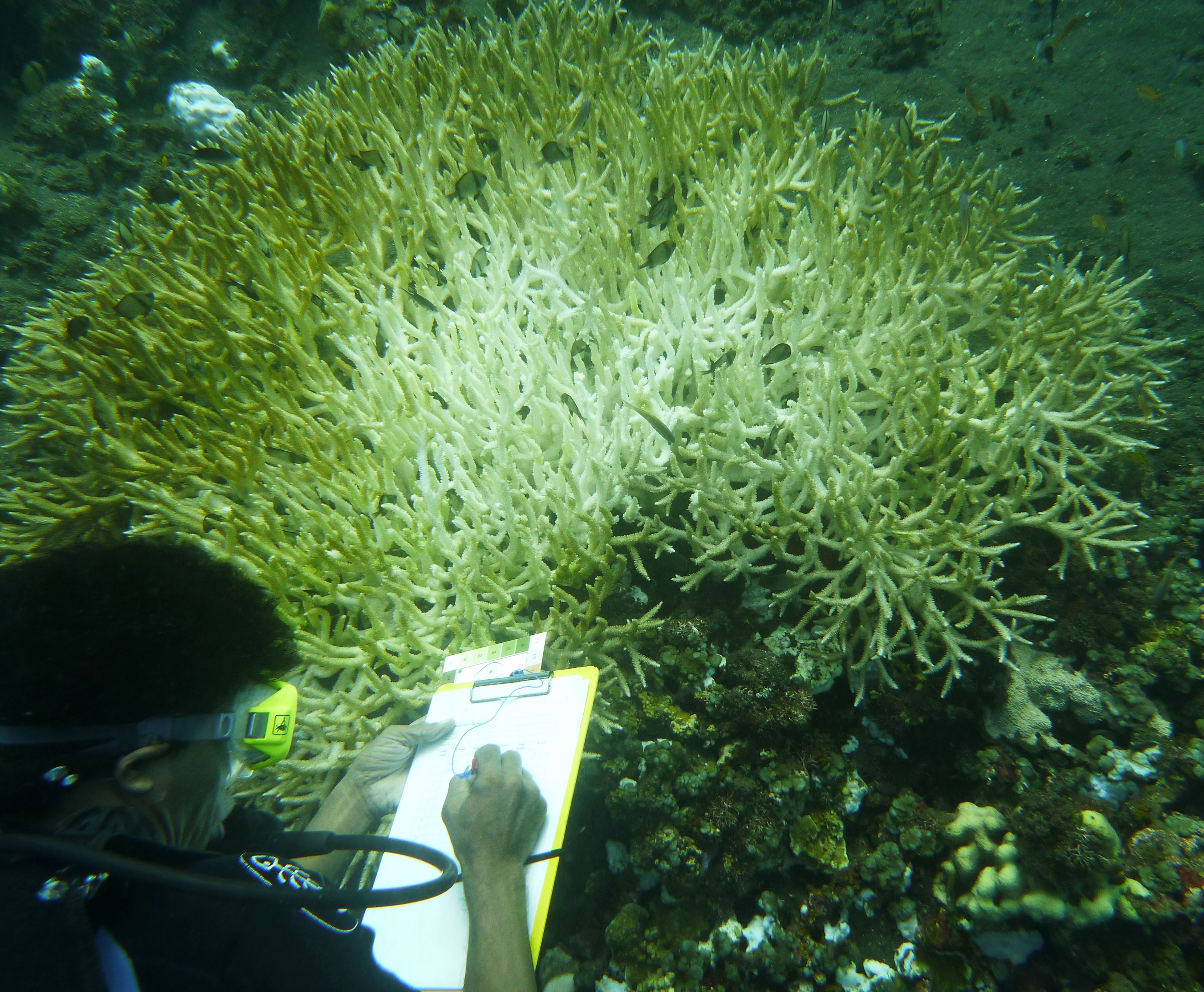 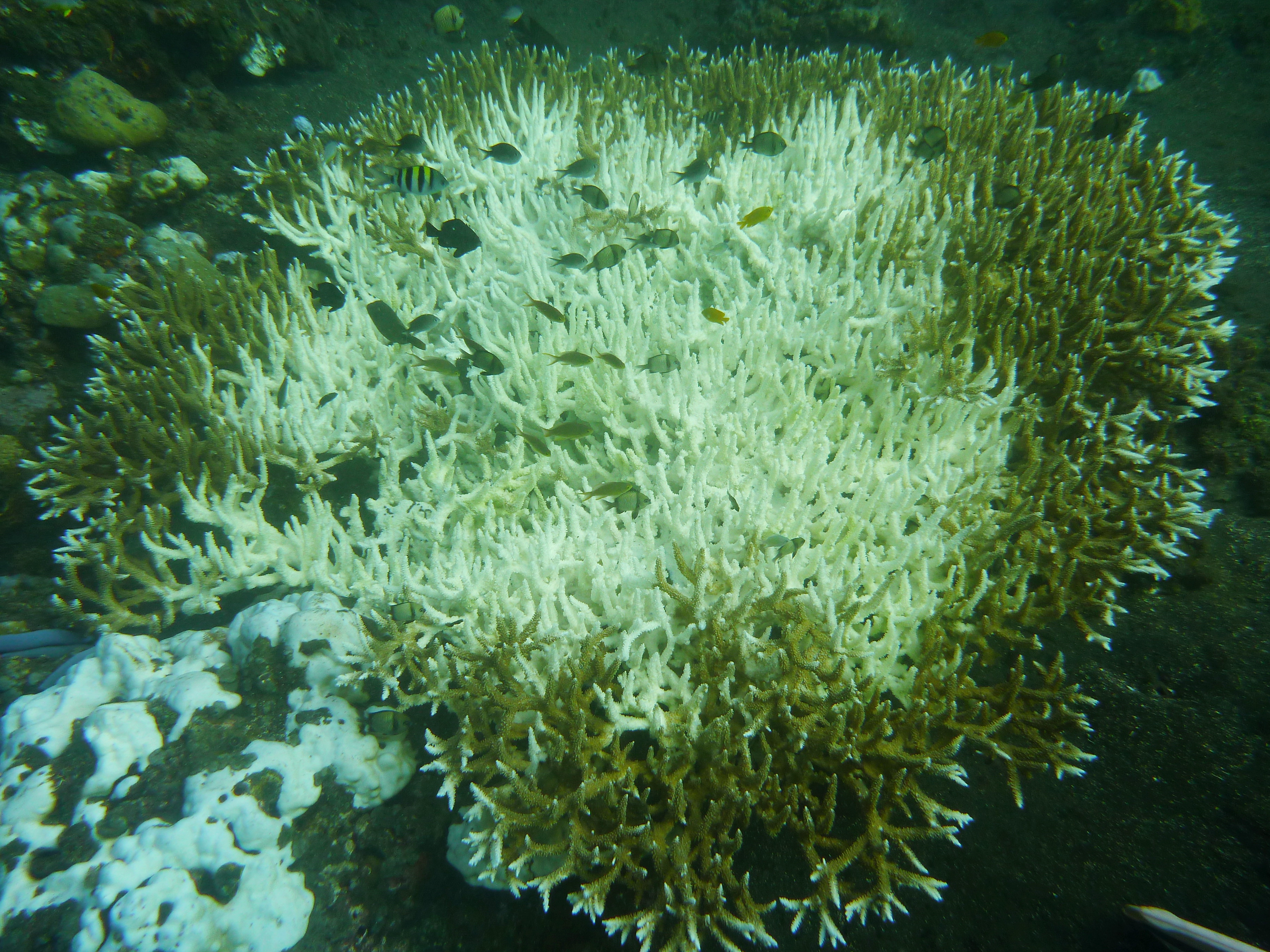 (Natural corals. Top-Left is a newly bleached coral. Top-Right is an old bleached dead coral now being colonized by algae. Lower photo, a beautiful heart-shaped table acropora coral that's bleaching in the center but remains alive in the edges.)

And yet, only 25-30% are bleaching in the surveyed area. The resilient ones we decided to periodically monitor include these corals: 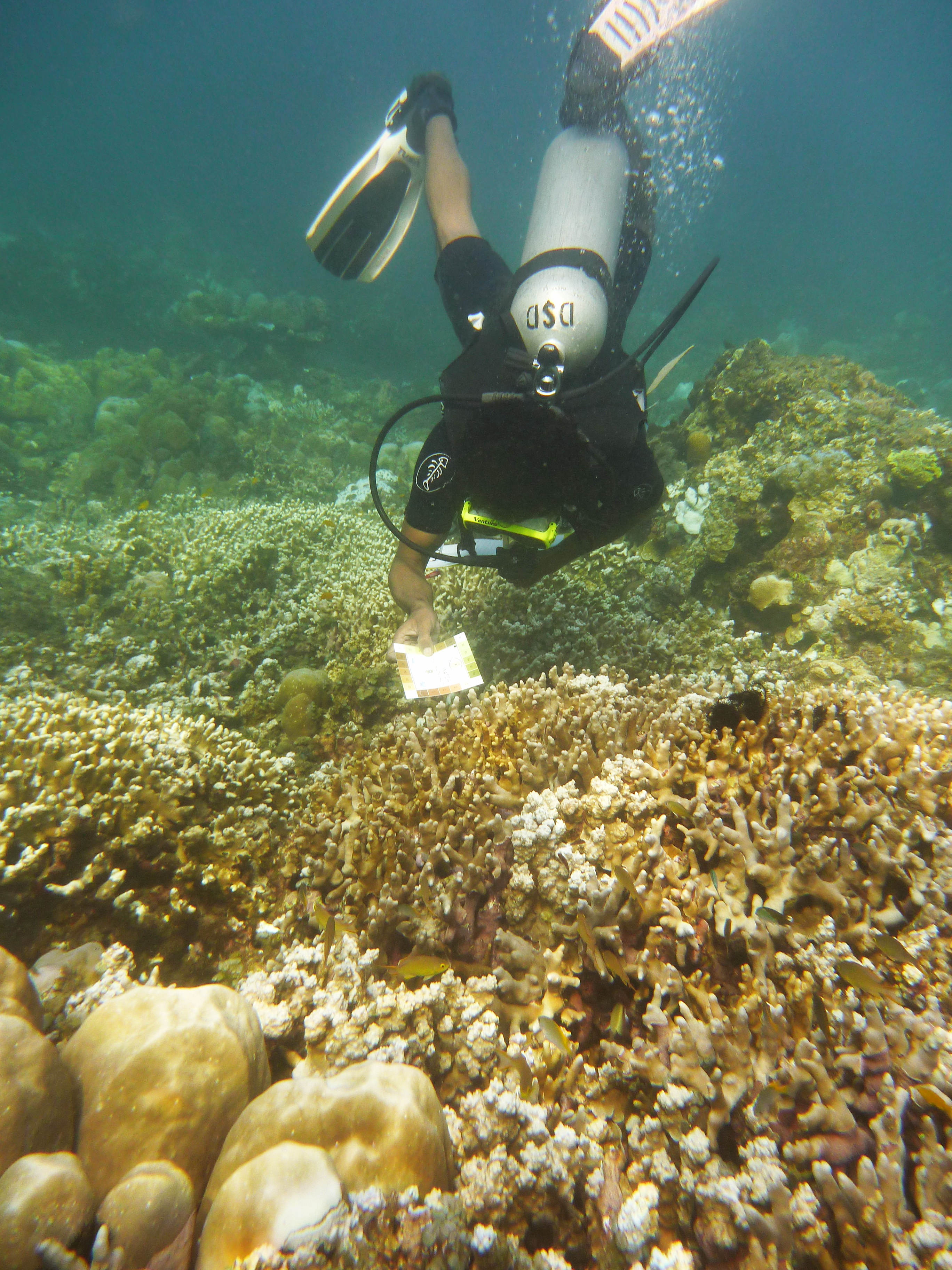 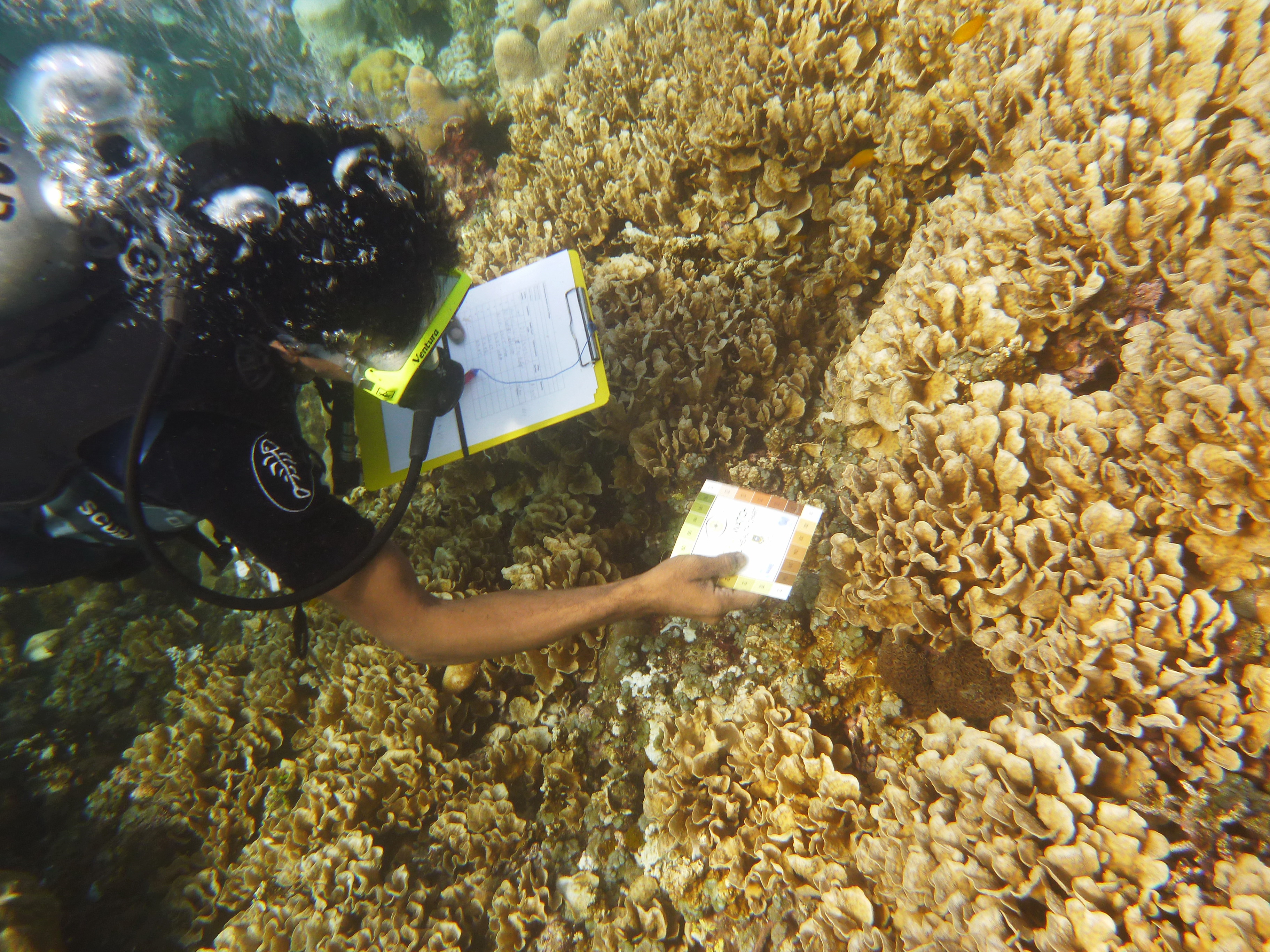 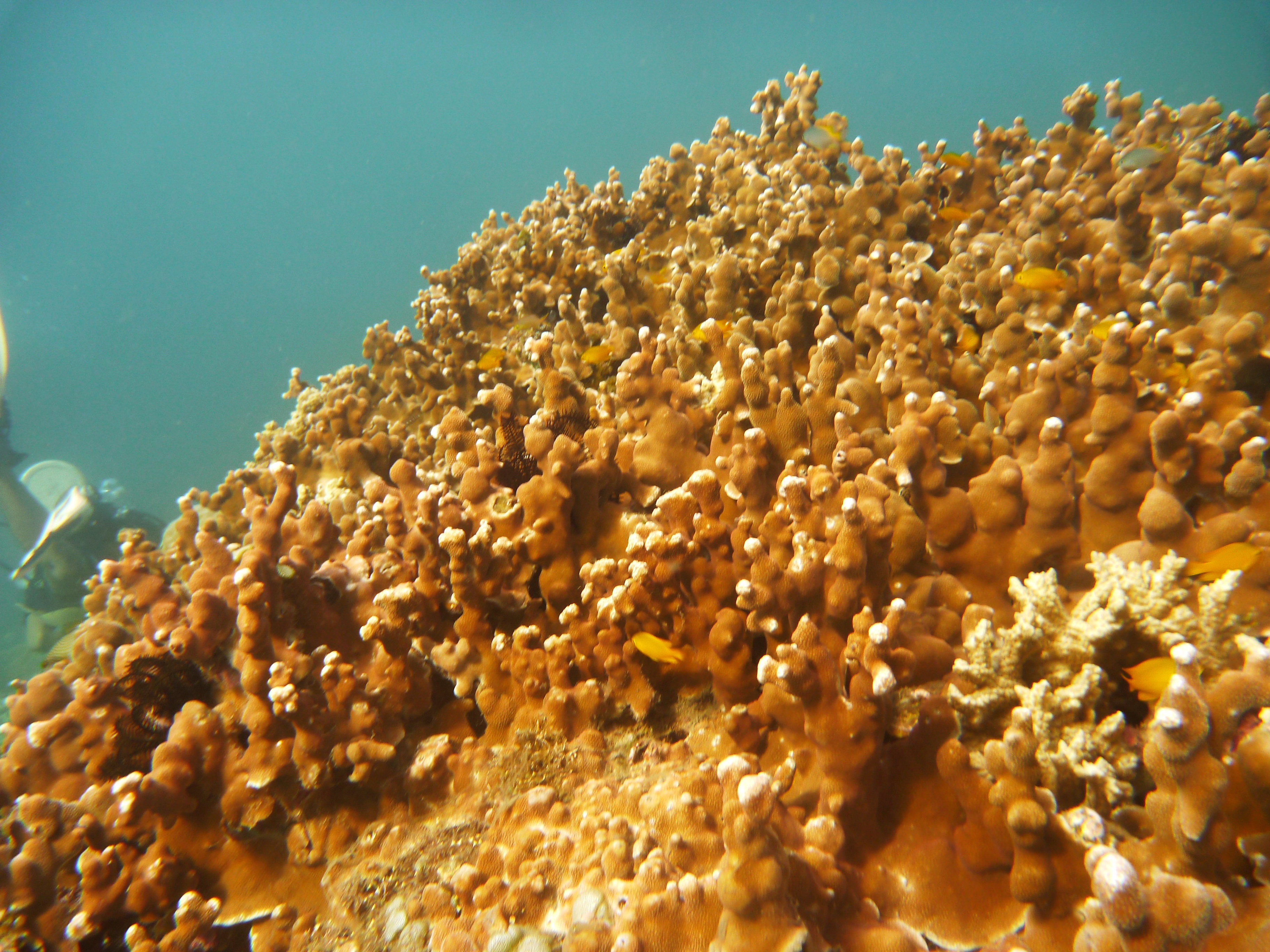 Coral reef rebuilding in Les Village tracks nature’s own rule on propagation and evolution. In the beautiful world of corals, survival belongs to the fittest. 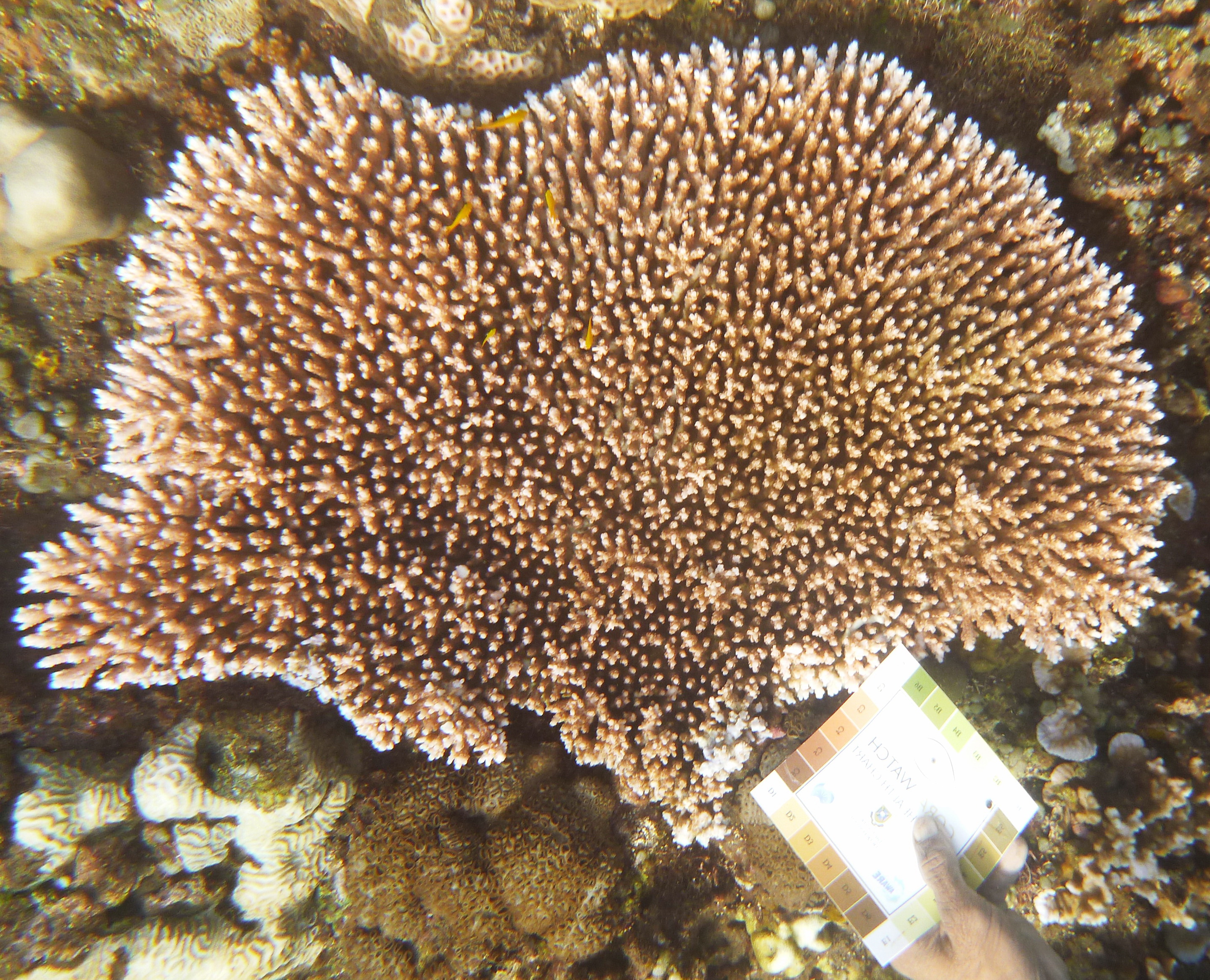