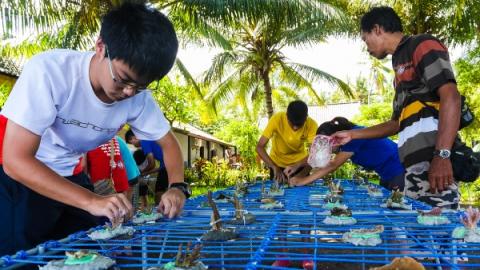 The science of what we do at Les draws scientists and volunteers to us.

Every year we offer volunteers an opportunity in July to join marine biologists from Tropical Marine Science Institute of National University of Singapore, Lutfi Afiq bin Rosli, Daisuke Taira and Joy Sim, who teach us how to grow coral optimally and collect data on how our reefs are regenerating. Even if you can't join our annual STARR expedition, you can still come and do quarterly surveys and help us collect data. Our annual expedition, STARR (Scientific Trial Active Reef Rehabilitation), has expanded from a monitoring exercise to a coral nursery and replanting programme. The video below filmed STARR 2017.

The aim of STARR is to learn ways of propagating coral effectively and cheaply, using materials available locally in villages. Our fishermen are well known to other indigenous communities, who invite them to teach the methods we use in Les. The trials in our Living Laboratory therefore have an influence beyond our own shores.

We are experimenting with coral nurseries on tables and on ropes. When the baby recruits are bigger and hardier at 6 months to a year old, we transplant them onto natural benthic. By sowing new plantings amongst dead reefs that are slowly recovering from cyanide poisoning suffered over 15 years ago, we hope to kickstart natural propogation through coral spawning. We measure the survival rate of different types of transplanted coral at different sites and depths. We try to understand what type coral grow best where, and why. 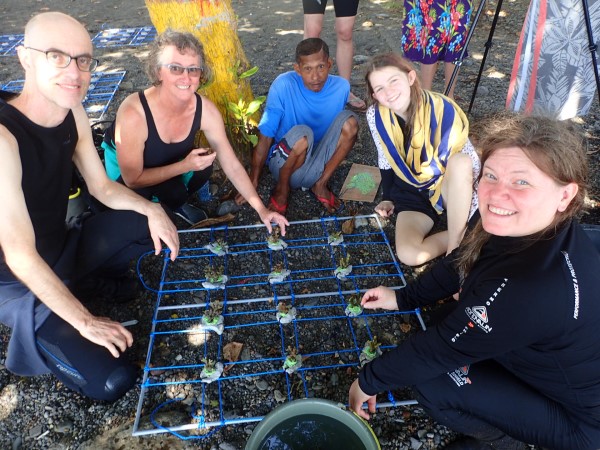 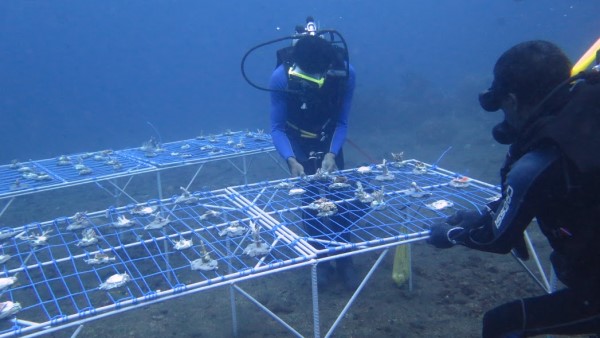 Our scientists have an interesting and very relevant CV. They are from a team helping the Singapore government regrow reefs that are being demolished for Singapore’s port development. They are preserving a “Noah’s Ark” of coral nurseries replicating the mother reefs, with the intent that these can be replanted at a new site. It is a laudable green initiative.

Last year, Ashlee, a marine biology student from the US, participated in STARR 2016 and what follows is her story of our experiments in our Living Laboratory in the reefs of Les. This is her blog. 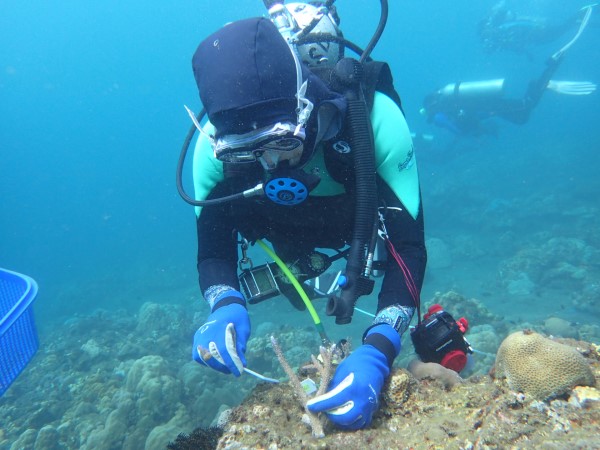 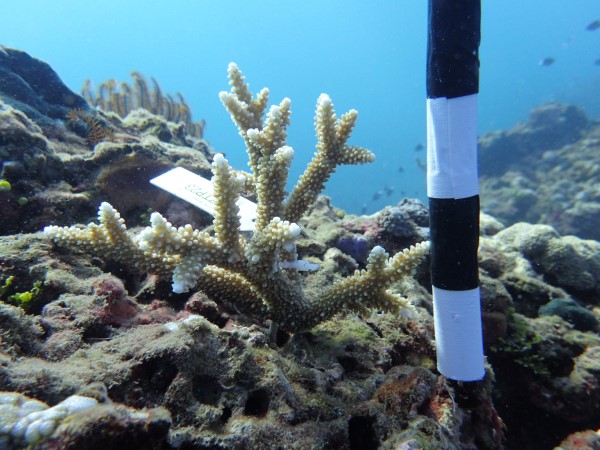 In STARR 2017, we designed and installed our first coral nursery tables, using a design introduced to us by our STARR scientists. We created a grid for the coral table using traditional fishermen rope weaving methods. Volunteer groups through the year funded and helped us launch this.

The tables have a detachable platform top. When needed, they can be lifted out of the water and re-woven with fresh rope and/or replanted with new coral babies. Each table platform is divided into 3 sections, where we plant 3 different varieties of coral grouped together in each section.

Through 2017, we launched 9 coral nursery tables so far. With the help of a school in Bali, we also trialled rope nurseries in 2016, using a simple set up of ropes and empty Coke or water bottles as buoys.

When the coral are of a hardier size, we harvested the coral carefully and re-planted them onto the natural reef. We already had mature corals in older nurseries, which were toppling over as they were too heavy.

In 2016, we secured the transplants into the natural reef using marine epoputty. The bonding strength could not withstand wave action and currents at Les. In 2017, we hammered nails into bommie outcrops underwater, at depths between 6 to 8 meters. We wire-tied the coral onto the nails. Each planting had an ID tag nailed beside it.

Three coral nursery tables were launched during STARR 2017 at 6, 9 and 12 meter depths, each table with the same 3 varieties of coral, both branching and encrusting types. This is to get an understanding of what types of coral grow best and under what conditions.

The STARR team also ran class size experiments, juxtaposing big and small coral cuttings of different varieties on the same bommie. These will be measured in 2018 to see which grew fastest, giving us an idea of the optimal size of cuttings we should take when harvesting baby recruits.

And, what do you as a volunteer, get to do? Apart from having a chance to live out your marine biologist inner child, you face one of the best tests of your peak bouyancy performance skills. In the words of an experienced diver who did his first underwater survey with us: survey diving brings out the best and the worst in divers! This is a fun yet meaningful way to practice buoyancy and underwater photography skills. We welcome divers of all skill levels, though. We have surveys to suit all levels of divers. The only thing we drill into our dive volunteers is, don’t grab coral for balance and position, or you will break off what you just measured.

All our volunteers leave a little legacy of their own baby coral in Bali. Join us and be a part of our reef rehabilitation. 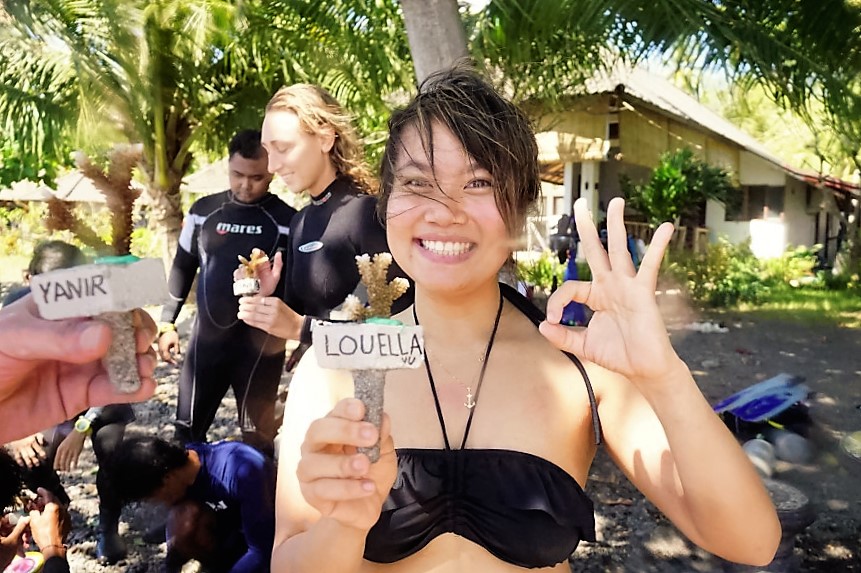 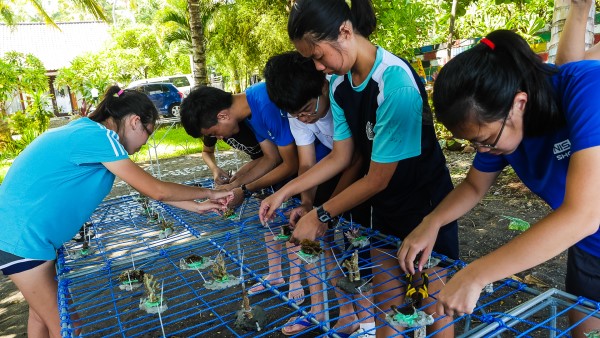