Well, our crappy summer-that-never-was and the autumn-that-rained-e-coli into Sydney Harbour meant that the crayweed project planting got delayed. Any sliver of good weather was seized upon by the two PhD candidates from University of New South Wales who put out a call at very short notice to the dedicated team of dive volunteers on standby. As timing would have it, I was in Singapore doing the ADEX tradeshow when the dive volunteers got the call for a days diving at Bondi. The volunteers were a mix of divers from the Underwater Research Group of New South Wales (URG) and a bunch of spearos (spearfishing freedivers, to our non-Australian readers). John Swift from the Underwater Research Group of New South Wales kindly lent me his article on their day out.

Pictures courtesy of Dr Ziggy Marzinelli of UNSW and John Swift "Johnno". And thanks to David Massih for handsomely modelling crayweed planting technique at its best. 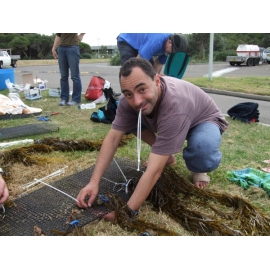 It was not that the damage was done on purpose, it was more a case of thoughtlessness, but whatever the reason, the result was near total elimination. A seaweed forest, which once stretched along the Sydney coast line, has vanished. Scientists think that the raw sewage, which for decades flowed into the Ocean off Sydney’s head lands, may have been the culprit.

Crayweed (Phyllospora comosa) had been a habitat-forming algal forest on the door step of Australia’s largest city, its disappearance impacting abalone, lobsters and key fish species. Was a re-afforestation programme possible and if so, would the marine life return.

A small group at the University of NSW led by Dr Ezequiel Marzinelli certainly think so and after much trial and error, plus a small grant they had a method and a budget, now all they needed was a little help. URG were very pleased to be asked to assist and a small group underwent training, first aid courses and medicals.

This took close to four months, but finally the day came and on the morning of the 28th April four expectant URG divers arrived at Long Bay to be met with a marine tank filled with recently harvested crayweed. The briefing included the low swell and that we would be ferried to the planting site by boat, things were looking good already. Interestingly we were shown how to differentiate between male and female crayweed. 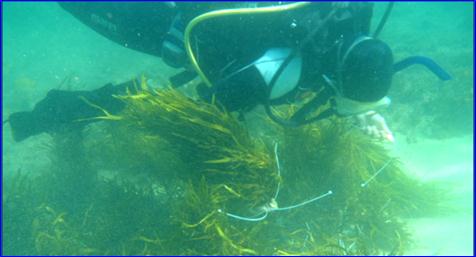 We took it in buddy pairs with Janet and Michael Abbott the first in the water, their job was to tie previously prepared mats containing ten crayweed plants to rings on the bottom. Easy I hear you say, well no, anything at 3 metres is a bit of a challenge, especially fixing bath mat size planting sheets to the rock platform with cable ties. David Massih and I stayed on shore and helped attach the crayweed plants to the plastic mats with smaller cable ties. This important process holds the plant stem firmly to the mat so that it does not rub. 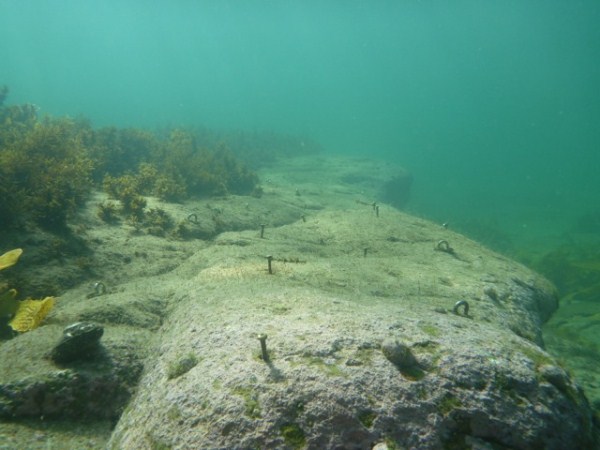 After an hour or so we changed over, with Dave and I jumping in the boat to assist with the cable tying of the mats to the rock platform. With my head in the swaying weed it was possible to get a little sea sick, but we were finished a bit after lunch and were very pleased to head home for a wash and rest.

Next morning we were at it again, this time at Little Bay, a very pretty area of Sydney just south of Long Bay. We worked in Buddy teams and with the previous days efforts still fresh in our minds it all seemed a lot easier. This time we swam out to the site, even this seemed interesting as we looked at the local marine life.

David returned to the sites a couple of weeks later and reported that so far all was proceeding as expected.

Will Sydney soon have forests of Crayweed swaying in her swells, nobody knows yet. Will the Crayweed reproduce, will we get a budget to plant some on the North side and did they survive the huge seas we have had recently? It’s obviously an uphill battle, but worth the effort and only time will tell.